CFRPG Divided and will Conquer! 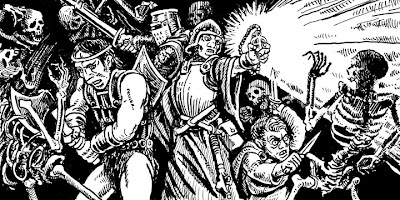 Books that will be Zines!

Unless my Gamer ADD kicks in!

Well I decided to cut and paste the S&W treasure table and I shall modify it accordingly.

After making the Back to the Dungeon Zine I really am thinking about getting my CFRPG back on the burner.

IF I can get this sucker is a state that I don't want to tear down and redo I may be happy with it. I can't help but think there are people not satisfied out there and want the style of old with some of the options of new.

BUT anyway switching from nights to days and have to wake up in a few hours after sleeping most of the day.
Posted by Eldrad Wolfsbane at 10:04 PM 1 comment:

Back to the Dungeon LL/AEC Zine!

So here it is the first Back to the Dungeon Zine Volume I Issue I. I have been working 7 days a week and up to 12-14 hours a day but finally have a fatigue day so sorry for any incomplete or half finished crap. Hopefully the damn links work but on blogspot it never does, has, or will work.

I really hope that more amateur publishers with delusions of grandeur start producing more Zines.
Posted by Eldrad Wolfsbane at 5:14 AM 7 comments:

DARK HORROR
Dark Horror is a very rules light Role Playing Game. Unlike most RPGs you simply start out with a name and concept and start playing. Everyone starts out with no equipment and must collect it as the game and story progresses.

First of all come up with a concept. You are a normal person trapped in a Dark Horror world. From your concept you can come up with your hit points.

Nearly all actions are done by rolling a six sided dice. 1-3 is success and 4-6 is a failure in most cases. If a character WOULD be better than average at a task the Game Master may give an additional +1 or +2 bonus to the chance of success at the same time there may be times where is is harder to succeed and a -1 or -2 is subtracted from the chance of success. In most cases you will succeed on a 1 unless the action is impossible.

One possibility is to give each player 4 points to built their characters. Younger characters will have less than 4 points.

Example: Tom says his character is a tough construction worker so he spends one point on hit points giving him 120 total. He also says he is a good fighter so the GM will let him hit on a 1-4 and miss on a 5-6. He also get one point on Fabrication as his story is he is a machinist. He put the last point on perception as he considers himself paranoid from all the bar fights he has been in.

Example: Kenny is a teenage computer nerd. He automatically gets Very Wimpy 60 as his hit points but the Game Master decides to give him the two points back for computers. Any actions with computers he can do on a 1-5 success and 6 a failure. The GM decides to let him have the other three points. He choose hiding as one as he is used to hiding from bullies. Chemistry as another and Comic Books as the last.

You never know what skill may save your life so no skill is too ridiculous.

Try not to make super characters as the world of Dark Horrors will take notice of someone too great and send it's evil minions to destroy.

A few Example Skills
Shooting, Fighting, Hit Points, Perception, Speed, and many others.

If a character's concept has him hitting on a 1-4 or 1-5 he is capable of a critical hit. On a roll of a 1 the character does DOUBLE DAMAGE!

Cover: From 10 to 100. Stops Damage. Any left over is subtracted from Hit Points.

Here below is a chart of different damages.
Punch, kick, slap 10
Small Weapon such as knives, daggers, hatchets, clubs, and short swords 20
Medium Weapon such as swords, axes, maces, and the like 30
Large Weapon such as two handed swords and axes 40
Huge Weapon such as great swords, great axes, and chainsaws 50
If someone were to add points to their character concept such as Strong +1 or Very Strong +2 It would add 10 or 20 points to damage respectively.


In most cases players move 30 feet a round unless they have come up with a good story of why they are faster and so athletic. No player can move faster than 50 feet a round.


Now for the setting of Dark Horror. Your character wakes up in a dark place. Some kind of building in the dark. How did I get here? Who am I? That is up to the Player. Has there been some tragedy in the Character's life? Have they been searching for a lost loved one? Has a dead loved one been seen and they followed?

What is the Setting?

It's really dark outside and there appears to be a problem with the electricity. It turns on and off. There is usually a storm or bad foggy weather. It is mostly a bone chilling coolness but once in awhile it may be terribly hot. Weird sounds of moaning or screaming is in the distance but it seems to have no source. If you wander outside you hear things wandering about. Make a terror roll 1-3 stay calm or 4-6 become terrified and run back inside.

Anyone that tries to leave by the wilderness is
1-3
Returns with half hit points and has aged 1-6 years with a 6 adding 1-6 more years. For every year lost past 30 years old you permanently loose hit points from your maximum amount.
4-6
A scream is heard and they are never heard from again. Make another character. May return as a monster later.


Monsters of Dark Horror from A to Z.

Posted by Eldrad Wolfsbane at 7:09 AM 3 comments:

Back to the Dungeon Zine Part III

Getting closer! It's going to be 44 pages long. Can't fit the second level that will be next zine depending on response. Got to add treasure according to LL/AEC so the chart is generous.

Posted by Eldrad Wolfsbane at 7:06 AM 2 comments:

Back to the Dungeon Zine Part II

Things progress well.
Editing will be horrendous, things will be "mostly" done with many holes for you to fill in, as well as grammar but that's what I like about a zine! The first two levels of "The Black Stairs" is really looking good. I am going to put the monsters back that my various players killed out in order to make the dungeon refreshed.

I hope to add a bunch of little worthless articles that just add flavor and background such as a postings post. Things like "Adventurers needed for Flying Potion Experiment: People with any loved ones need not apply".

I hope to release Temple of the Monkey God as a zine soon as well.

Things at work went haywire on day shift so I had less "ass time" to finish up my zine as planned. It does seem that the universe is against me gaming!
Posted by Eldrad Wolfsbane at 12:18 PM 2 comments: