Back to the Dungeon Zine 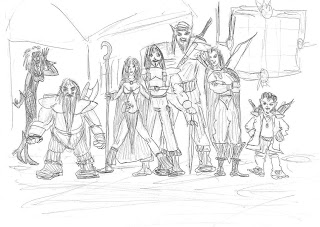 Guess what in my exile from all life called a turnaround for at least the next few weeks I am going to be cutting and pasting my notes from "The Little Barony: Raven's Keep" and possibly the first two levels of the black stairs as well as the one level dungeon Bloodrock Castle. Also the area map where one inch equal five miles.

I am putting it in a little foldover zine pdf inspired by the Ryth Chronicles and the Mikidemia Towns of the Outlands and The Black Tower. Been reading that between the writing sessions.

My how far we have come in gaming and how far off the path we have went.

As long as my people behave on the job it won't be too much of a task for me to write my little booklet. If people like then I may write more.

Looking at Fate and Fudge how could these systems be distilled into a system using a positive and negative D6 roll? I don't feel like looking for or buying special Fudge Dice so Nah!


Like from Icons One Dice Light and one dice Dark. Subtract the dark dice from the light for a result of -5 to +5.
One starts out with 6 points to spend. An average set up is one VG and four G. One cannot start out with more than +3 EG.

You get 6 destiny points. Only players get these.


For example Markus the VG Swordsman and G dodge is attacking a thug with G Club and VG Dodge.
He rolls a 5 light and 3 dark for a total of +2 making the result Master +4.
The thug with a result of 3 light and 5 dark for a total of -2 result Average Dodge which is four less than the Swordsman's Legendary result giving him a -4 to all actions.
If Markus was a PC he could spend Destiny Points to make the result higher.
If his Stamina was higher his result could have been lesser. For example a G Stamina (+1) would make the result -3. If he had on Medium Armor (+2) with the G Stamina (+2 plus +1 = +3 total) you would only have a -1.

Four Attributes are needed so far.

Magic: One would have a Sorcery Skill in order to cast.

Magic will be found in Tomes of specific use. Such as!

Book of the Night and Stealth
Shadow Form: Remain unseen for one hour. Someing at complexity of +3
Drain Life: A touch spell so no Druneing but a Keening of +2 and a Soming of +1 for a total of +3 difficulty.
Travel through Shadows: Druning of a range of +2 and Someing for a compleity of +2 for a total of +4 Difficulty. Don't mess up!

More on this idea later as my Gamer ADD strikes me!
Posted by Eldrad Wolfsbane at 12:58 PM 4 comments:

1.Take your current modern city’s population and divide it by 10. This is your fantasy city’s current population. Change the name to a more fantasy feel. For instance I changed Lake Charles, LA to Lake Charlemagne (which I am currently fiddling with due to other projects writers block and ADD), Baton Rouge, LA to Red Staff (or Staff Rouge I can't remember), New Orleans LA to Saint Orleans. Towards the west I changed the name of Beaumont, TX to Bearmount and Houston TX to Hugestone. ANYWAY get the picture? Change your hometown into a fantasy setting! Divide the population by 10 or it will be way too hard to manage all those NPCs!


2. Use the standard method for character creation. Standard races and classes unless allowed by the GM. Get some players. Be honest. We may have to go to a point buy of Attributes but for now it will be standard rolls.


3. Now start creating maps based off of real world geography. Use most of your main streets and waterways. If living in dangerous areas the cities need to be walled. Many of the bridges can be replaces by ferry crossings although huge bridges and landmarks should be converted into gigantic ruins. Add in the demi-human races and their areas. For instance in forested areas and parks add elves and gnomes. Any rocky areas add Dwarves and such. Don’t forget to add areas where the foul humanoids live. The world has to be still untamed.


4. We will use the Pathfinder or any other OGL 3.5 rulebooks at first and go from there.


5. Every Player and GM MUST contribute to the setting by writing up at least a shop or building in the setting. Yes the players help write the game making it more theirs. Remember to not go too far.


6. Other Rules. Time units and Calendar. There are 365 days in a year. Unless the players want to write up a special calendar then we will use the standard earth calendar, as in days of the week and names of the month. There will be 365 time units that a character must spend as he plays. One day equals 1 time unit. A week is 7 time units. The starting day of the first official game will be Jan. the 1st. Year unknown until we come up with a story.

Is Yur World a good name?

New Skills, Feats, Classes, and Rule Variants in general will be judged very harshly. If your idea is rejected go rewrite it and then resubmit it. We are not trying to write rules we are trying to create a setting with the rules as the framework.
Any artwork, poetry, and adventures will be used if possible with full credit given to it’s creator.

This has to be the campy old school type of gaming mixed with the new rules.

Now make sure and have a graveyard with all your old deceased characters in it. If some of your old characters are still alive remake them and play them or reuse them as NPCs. Make the children of your characters from long ago! Rehash old villains and adventures into your setting and have that as part of Yur World's setting.

I know that Ronvug the wizard from back in 81 is now a lich and he is now planning on taking over the lands!
Posted by Eldrad Wolfsbane at 5:33 AM 4 comments:

A few items edited and added to CFRPG. So far good reactions! The LINK feature does not so work cut and paste. https://docs.google.com/document/d/1XVpb8_3ol4P4v_doAdIKoWvMpvYgLE0lBZU2pgpCY_0/edit
Posted by Eldrad Wolfsbane at 6:47 PM No comments: