THE APPENDICES PART V: "The War of the Ring"
Disc intro by director Peter Jackson
"J.R.R. Tolkien: The Legacy of Middle-earth" documentary

Here are great short films and such. Great inspiration for creating a setting. Details that you can use for your games. There are many small details that one might not think of. Damn I was going to write more but it's really tough right now.
Posted by Eldrad Wolfsbane at 5:21 PM 3 comments:

How the hell do you do it? 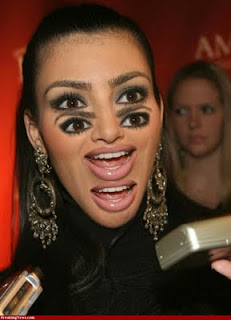 Oh lord it is really hard! Get your minds out of the gutter slimes! It's really hard to write a freaking game. Even simulacrums that many accuse of it being "just copying". Well you shut the F*&^%K up and try to do it yourself. Oh I didn't think so Beeearch!

Many of us have "a take on what we would like to see" and THINK we can do it to but NOOOO! You won't and you can't. Either no free time or not the patience when there is free time. I envy those with that little extra spark that can get off their ass and write a game.

Hell trying to write up a decent module with production value is a task as well.

Lord knows I have built and burnt down my take on the OSR rules and such. Then loooooooose interest and then write a few lines. Should I truck on or gather a team? Should I just write a supplement of house rules? Damn a game is a huge undertaking!

SO my question to all writers and creators is : "How the hell do you do it?"
Posted by Eldrad Wolfsbane at 5:44 PM 7 comments:

NOTES:
As will be told in the next session summary, the Drow, Sorceress, and Dwarf
Fighter disappeared once we got to Barton's Manor, so no booty for them! So the
Human Fighter and Cleric both get 410 GP Each.

NOTES:
We lost track of the Drow Rogue, Half-Elf Sorceress, and Dwarven Fighter, but we picked up a trio of adventurers (Sylph Druid, Human Barbarian, and a Ranger) who were looking for adventure. We ventured from Barton's Manor back to the entrance of the ruins and continued our scouring. We are becoming more self-reliant as a group, which gives us more time to explore these caverns. We are currently resting in the Steward's chamber. We will need to go back to civilization soon to off-load our loot and restock our supplies.

Another marathon session. First, Lighter shows up after delivering the blind chicky to her village. He shows up with an elf maiden warrior. They showed up just in time to help us defeat a rust monster. We then destroyed a small group of Duergar dwarves who tried to ambush us. The barbarian then started suffering from claustrophobia, so she exited to the surface for a while.

We carried on, encountering some Morlocks. Funny-looking creatures. But then almost all of us fell into a spiked pit trap. Alas! Necros fell prey to the trap. So after looting his corpse, we came across a talking door. We were pretty banged up at this point, so we decided to go back to Barton's Manor to restock and heal our wounds. There, we purchased a few items, sold a few items, and buried Necros.

Back to the dungeon we went. On our way to the talking door, we encountered and defeated some Stirges. The talking door room was called the Room of Mysteries. That was an apt name, since the purpose of the room remains a mystery to us.You put something in the Box of Mysteries, and it disappears, and nothing happens that we can see. We moved on down the hallway to encounter first a Wight, then some Ghouls, then some Zombies. We rested again in the supply room. After a few days in there, some humans knock on the door and demand we let them in. After speaking with them, they are explorers as well. They are searching for the Talisman of the Sphere in the levels below. We agreed that if we come across it, we would let them have it for a finder's fee. We came across one more trap, but survived it. We are currently moving west in a corridor leading roughly towards the entrance.

NOTES:
Total split of treasure is 140.8 GP Each. (42 + 1.1 + 3.12 + 527 - 10)/4 =
140.80 + 2 CP. (extra 2 CP given to merchant lady) We still have 5 gems worth
300GP each, and a diamond with unknown value in our possession.
First, we continued our exploration of the first level of the ruins. We defeated some human bandits. We freed the female prisoner they were holding from one of their raids. She tagged along while we completed our search, during which we encountered some fire beetles and orcs. We then went back to Barton's Manor to deliver the lady merchant to civilization, and gave her some GP's to get herself to Raven's Keep.
After resting and restocking, we headed back to the ruins. This time, we decided to go down to the 2nd level. While descending the main staircase, we were attacked by a giant spider. I got bit, and the poison spread through my system like wildfire. Barely able to breathe, my companions got me back to Barton's Manor, where I healed myself after a few days of rest. (I was left with 1 point of Strength - CLOSE CALL!)
So we returned AGAIN. We found the partying skeletons again, where they PROMPTLY gave us the promised gem for the disposal of the Bugbears. They also lent us the gold key for the gold door. So we went through the gold door after destroying a group of non-partying skeletons. The doors led to the antechamber of the Drow undercity.We ran into and freed a Deep Elf escapee, then attempt to sneak around the Drow undercity. It all went fine until the giant bats attacked us. We defeated them, and are continuing on. Hopefully, our battle went unnoticed...
Posted by Eldrad Wolfsbane at 6:38 PM No comments: