Well I finally started running 5E and I am so far, very impressed. Yeah I know, I am late to the party but I was trying to push my own Level Based D20 Fantasy RPG, but now I am done with that.
It was something I wanted to do.
I did it.
Fantasy Heart Breaker.
Boo Hoo!

I kept seeing everyone else having fun at the party so I gave it a second look.

So let's get started with the review! Let's start at the beginning.
Characters!

It's the standard 4D6 take away the lowest, standard array, or point buy. Myself being old school, prefer the rolling method.
The standard SDCIWC attributes of the D20 system with the standard modifiers.  Pick a difficulty and roll a D20 and add the attribute bonus. If you are proficient then add the proficiency bonus. It's all time tested and works very well.

The races have been streamlined and simplified and they work very well. There is a great selection of races and subraces. Elf, Dwarf, Halfling, Gnome, Half-Elf, Half-Orc and Humans from the standard old school cannon  are the selection of races. Tieflings and Dragonborn are included as well.

The classes all have the simplified aspects and all serve their functions and the system allows for the blurring of the classes through backgrounds. The classes all work very well. It's just simple and fun to play. 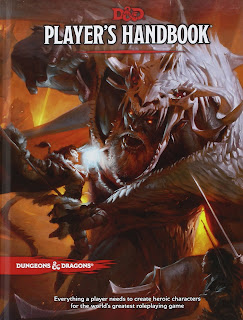 Backgrounds allow for one to coustomize their characters to help form a personal story.

The skills and weapon proficiencies all work the same. Proficiency Bonuses stack onto the attribute rolls the same in skills and in attacks. If you are not proficient then you don't add a proficiency bonus. The proficiency bonus is awlays the same and depends on the level, with +6 being the highest. Yes the math had been gotten rid of for the most part.

They make making a character for the inexperienced players totally easy and understandable.

Magic is a semi-Vanician but with a twist. You memorize a small list and then have spell slots (basically spell points) to select between the memorized spells. You have useful zero level spells that actually can cause some damage. It's more fun to play a caster now.  Characters seem more powerful now until you start looking at the monsters.

The monsters in 5E are back to being scary. If you go against many of the monsters of the past, blindly attacking, you might have some problems. The monsters can be easier to hit but now they have lots of hit points and do a lot of damage.  Combat is really fun once again with no more of the +27/+25/+20/+12 to hit multiple attacks versus an AC of 36. Whomever designed the new system realized that it wasn't necessary to always have inflation of of to hit and AC to have a good game. It's the same with the skill and attribute checks, all simplified.

I can see the OSR influence on 5E. It's the game that an old school gamer and a new school gamer could be at the table and both have a good time.

Although the monster stats blocks are longer than I like, they work. They are perfectly organized and make running monsters easy.

The DM's guide is a great guide for starting DMs as well as a great source of inspiration for we DMs who may not have the youthful free time.

Most of your rules are there to run the game and the magic items. Very well organized.
Made to be easy to run.

Very simply, 5E just flows very well in play, promotes hack and slash deep role playing, and had brought the game back to it's old school roots with the innovations of the new rules.  It has fixed many of the problems of the past editions and is the perfect  hybrid of the game. Now everyone has an edition that all gamers can sit at the table and play.

I can see the age of the retroclone possibly becoming a fading fad as this edition satisfies the itch for all styles of play and gets rid of the more asinine restrictions of the past rules that the OSR holds on to.
It also does change the fantasy death gore festival of the old school but unlike most newer games, in 5E you still have  a pretty good mortality rate.
It seems that many of the OSR have converted. Still, many will hold onto their systems that they love. More power to them. You might want to find a game that everyone else is playing or at least that has always been my problem in a smaller gaming community.
Nevertheless, I will still keep playing 5E in the brutal OSR style.
Do I mean that the OSR community is over? Not hardly. The "do it yourself" spirit is always going to come through.
I can't wait to see the OSR inspired products through the DM's Guild!

The other Mathfinder system is going to be in trouble as well if it's not already. It's become or always was a bloated monster. A really fun to play bloated monster but it can't compare to the new 5E that has taken D20 to the "just right"place.
They have done a White Wolf to some of their players with their 2nd edition according to may of their players.
They are going to change what made the Mathfinder game what these power gamer and min-maxers love as far as I can tell. The point of the game was to keep the system that all these people were hanging on to. Maybe the world is ready for a 2nd edition Mathfinder.

I love that this will also invigorate the RPG industry and hobby!
What I am seeing a new BOOM of people playing in my area and the game that they are playing and having fun with is 5E.

I would rather join then die. Maybe I can get some of my goals I wanted with BttDRPG. A huge multi DM campaign of old. We shall see.