Here below is the new Legends and Lore article by Mike Mearls. I think he is trying to reach out to all the "lost" gamers who are not playing 4th edition. I just bet there are going to be some really pissed off old school gamers.

Are gamers of older editions being called stupid? I don't think so but someone is going to get their proverbial panties in a wad and we shall see.

Last week, I talked about character classes. Using the fighter as an example, I showed how the game’s complexity has steadily risen over the years. That trend goes far beyond the fighter. In general, each version of the game requires more math, has more detailed rules, and features more specific corner cases than the one before it. 3rd Edition combat featured many rules that were optional in 2nd Edition’s Player’s Option: Combat & Tactics. 4th Edition’s power system requires every player to understand how to read a power, apply conditions, and manage ongoing effects.

When you look at games and how they develop over time, there’s a natural tendency to see ever increasing complexity. Picture an old Atari 2600 controller. It was a joystick with one button. Now compare that to an Xbox 360 controller. The 360 has two control sticks, a d-pad, two triggers, two bumpers, four buttons, a start button, and a select button. (At least, I think that’s what it has. I’m going off of a picture of one I found on the Internet.) That’s two elements for the Atari and thirteen for the 360.

If you look back at last week’s article, you see a similar rise in the complexity of D&D. With each passing year, the game has become more complicated. So what’s going on here? As the title of this column indicates, I think we’re seeing an overall rise in player skill, more established tropes of gaming, and a better network of tutoring and knowledge. Our collective gaming brain has grown larger and larger, and therefore seeks out deeper, more complex games.

Player skill is the easiest and most obvious factor to look at. If you started playing D&D back in 1974, you soon learned the basics of the character classes and perhaps gave each one a play. At some point, you’d start to hunger for more options. You probably also spotted a few areas where you thought a few new rules or changes would improve the game. While all of that happens on an individual level, it also translates across the entire player community. As a whole, we gain more experience and learn more about games and what we want out of them.

That process feeds into the next layer, the rise of tropes and clichés. This one is fairly easy to explain via an example. The first time you entered a dungeon and the character at the head of the party fell into a pit trap, it was a big event. The fifth or sixth time you came across such a trap, you probably discovering it first by tapping ahead with a pole or searching for traps; it was something you expected.

In the same manner, a lot of the rules of the game become second nature. If you understand how attack rolls work, adding a bit more complexity to them is no problem for you. Something like 3rd Edition’s flanking is easier to understand for a veteran because it makes intuitive sense. If you surround a guy, he’s easier to hit. Since you already understand the game’s basic framework, you can more rapidly absorb and understand changes.

Finally, all that knowledge spreads between players. A new player in 1974 could perhaps find a gaming tutor who had been playing D&D for a few months. Today, you might find someone with three decades of gaming. As the community develops its expertise, it also sharpens its ability to teach new players.

All of those factors point to why we’ve seen a steady increase in complexity over time. As a group, we’ve mastered the rules and started to seek more options. We’ve assimilated various tropes and mechanics to the point that they’re intuitive, providing a foundation for more mechanics to rest upon. And against the backdrop of this complexity, we’re better overall at teaching the game to new players.

But of course, explaining why we see complexity on the rise overlooks the real question. Is complexity a good thing—is the game better served by having lots of rules and options? Should it feature a lot of depth, should it remain relatively simple—or are we best served by a game that offers a broad range of complexity?

I imagine that most people would prefer a game with a complexity level that they can set themselves. Traditionally, D&D has featured that by making fighters relatively simple and wizards more complex. Instead, I’m interested in hearing about your views on the different editions of D&D over time.
Legends & Lore: Poll #3 Results

Your fighter loses all his or her feats, skills, powers, and non-weapon proficiencies. Yet, your standard swing with a sword/shot with a bow is effective enough that you don’t feel overshadowed by any of the other characters in the group. How do you feel about that?

* I’d be bored doing the same thing over and over again, round after round in a fight: 40.7%
* I’d miss the mechanics that made my fighter unique compared to other fighters: 30.4%
* I’d be happy that I can have an effective character without the complexity: 14.5%
* As long as my character is equivalent in power to the rest of the party, I’m fine: 10.5%
* I’m not concerned about the mechanics or balance, so I don’t care: 3.9%
Posted by Eldrad Wolfsbane at 8:36 PM 3 comments: 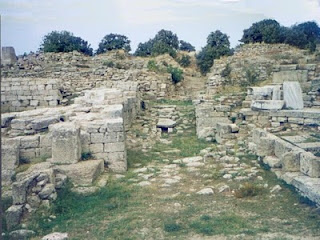 NOTES:
Total loot comes to 325.72 GP Each (except Machelle, who gets 205.72 GP.
We met up with a Necromancer who wanted to team up with us on an adventure. So we agreed and entered a sanctioned dungeon. We flubbed our entry of the dungeon and ended up on the 2nd level. Even still, we kicked butt, but decided not to press our luck. So we went back to town to heal up. We went back to the dungeon and ran into two more members of our group, who joined up with us.
We defeated some bugbears and gnolls and went back to town. The industrious Rogue decided to steal some potions from an alchemist shop. She got caught, killed one of the workers, and was captured by the city guard. The rest of us feigned ignorance and went back to the dungeon. We had a rough go against some goblins, but we defeated them and freed some slaves at the same time.
The only thing that is unsettled is a gem that some intelligent party-skeletons promised us in exchange for getting rid of their bugbear problem. A Dwarf never forgets...
... except that everything mentioned here may not have happened exactly in the order described, but it all happened at some point. :-)
Posted by Eldrad Wolfsbane at 8:42 AM No comments: