The Gangs of Raven's Keep

"In a little Barony far far in the Western Frontier"

Gangs are a problem in any kingdom or empire. Here are a few that have moved into or formed in The Little Barony.

Bonstas - A really vicious and tough gang that is empire wide.
They believe in blood and fear.
They are know for killing every person in an area to send a message.
They also know how to disappear when the law comes to take them out.

The Foreigners - They are criminals from foreign lands that have no loyalty or ties.
They commonly take on any gangs in their way.
They also have many spys and assassins and can and will do espionage for any other foreign power.

The Ladorians- A thievery's guild specialized in robbing nobles.
They are ran by a sect of evil clerics who worship a god called "The Ladder".

The Daggers - A lowlife guild of thieves and thugs.
They don't know when to back off and are not very careful.
They also take anyone who wants to join if they survive the beat in.

The Martins - A very large and organized group much like the Bonstas but with seemingly more class.
They are in league with devils though.
Posted by Eldrad Wolfsbane at 9:32 AM No comments:

BACK to the DUNGEON ZINE for LL/AEC V1 I2

BACK to the DUNGEON ZINE for LL/AEC 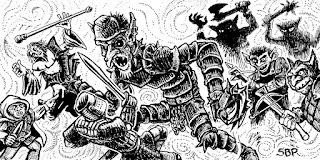 See if your players can survive! 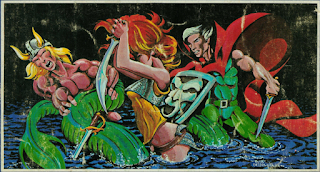 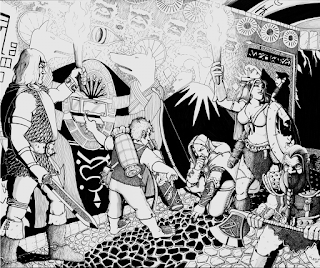 Posted by Eldrad Wolfsbane at 7:31 PM No comments:

To the shelf with BttDRPG!

Well I am shelving BttDRPG. You can still download it from links previous until I decide to take it down all the way one day when I am bored. Either way no one will notice. ;)

I am still going to make Back to the Dungeon Zines/Modules/Houserules for LL/AEC though. I thoroughly enjoy putting those together and my megadungoen "The Black Stairs" and Ravenkeep have tales that MUST be told. Deep roleplay hack and slash story dungeons.

I am going to reedit V1 I1 to a 1.1 because I found numerous crap mistakes.

V1 I2 is chugging along nicely.

Here is an excerpt from I2

The University of Raven's Keep
University: There are various mage orders at odds with
each other. They will take it to the streets after dark.
There are other non university mage orders but the
University Mages believe themselves the authority over all mages. They are trying to get the authority to have a Mage
License. Professor Martinus is one famous professor who collects all kinds of monsters and artifacts.

Replenishing DEAD characters.
Remember that any room with a P in it's description may have additional NPCs or is another area for new PCs. Or it is Prisoners of low morale that can be used as cannon fodder.


Ranger Reports
Men of Bordermarch have been seen by Rangers within our borders. They are from the Western Kingdom beyond the Western Desert. The Men of the West are know for their purple clothing dyed from a hardy desert berry. Bordermarch is a fortress that guards the main East West Road that comes out of the Great Eastern Empire into their lands. They are a race of men with dark hair and tan skin and their eyes the color of metallic purple or violet. They worship a harsh god called the Provider (LN) Malsalla. These men frequently come to our lands to raid our dungeons.

Early Weekend Morning, Entering Town, East Gate, Black Haired Thief 1 Gras-zi Girl about to be hug on the wall. A few other bodies (1d10)hang on the wall in various states of decomposition. Players could be just arriving to the town.

There are 1d6 victims at the stake tied up and waiting to be burnt.

There are ten stocks filled with 1d10 people.

Ravens, Crows, and Buzzards are feasting on the dead.

There are four swill pots with 1d4 victims. A swill pot is filled with water and only your head sticks out. You are left there to die in your own filth.

The guards at the gate don't really check anybody except for attractive females.

The city smells of incense, cow and horse manure, dog and cat waste, human feces and sweat, and the smells of mud and mold BUT not as bad as most cities!

Clear running water flows in small and large canals all over the town.

The place is lit up by oil lamps and continual light spells.

The Illuminations are a group of mages that light the lamps.

Thom Cankers is the Corporal. F2

Ratskin the Beggar T2 offers to be a guide to the town for a small meager price. He will lead the weak to get mugged.

In the tavern a troublemaker Hans and his friends start fights with weak “0” level humans. He loves to “beat the weak” and humiliate them afterwords by making them degrade themselves and he really loves to abuse girlfriends of the weaker men right in front of them.

A runaway cart! It might kill somebody!
Foreign Traders selling Slave Wear!


Various Postings Around Raven's Keep
Any poster with a U next to it is not available at this time.


Poster for Arena. Want to make som gold? GO fight in the arena!

Adventurers for Hire Bloodrock Castle The Baron U

Quest for the Dwarven Citadel contact Lord Stonus U

Explore the South Western Swamps U

Escaped Slave in revolt! He must be captured or killed! Calcutus!

Wanted: Retrivial of Zombie Slayer Sword of great worth to my family. 600 gp reward. See Stratton

RESCUE! Three Merchants lost and believed captured near the ruins “The Black Stairs”! Reward 1000 gp each. See the Merchant's Guild

RKAS This is the Wolf Wounded! I have an official claim on the Black Stairs. That ought to keep and claim jumpers away.

CAUTION: Zeuzalonyian Slave Tartus has escaped with 20 men! Reward from the Baron.

This is Storm, Van Von I think I love you!

WANTED: Adarian Elves! Any caught in the city to be turned into the Guard! They are traitors to the Baron!


Posted by Eldrad Wolfsbane at 8:09 PM No comments:

Back to the Dungeon V1 I1

In a little barony far far out in the frontier...


It is a ZINE, it is an adventure for LL/AEC.

It was written many years ago.

It is the first level to the Megadungeon called The Black Stairs.

It would be really fun to run it using LL/AEC but people around here look at the OSR stuff like herpes.

Only in times of great boredom will it ever get any deeper or will another issue come out for it though the next four levels are all on paper.

Posted by Eldrad Wolfsbane at 8:48 AM 3 comments: