All my DriveThruRPG products on sale! 25% Off!

All my DriveThruRPG products on sale! 25% Off! 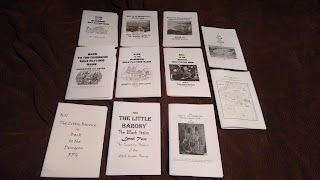 I have released two older completed projects that are in playtest stage that I forgot I had, for sale as a very inexpensive PDF on DriveThruRPG! If you like my games then feel free to tell the world!

MOST of my games are made to make fold over zine booklets because Zine Booklets are cool and beat the MAN.

They have been free online for years in one form or another but now I have decided to make them available for a very low price as I am unemployed and uninsured.

STARCLADS
Rules for Science Fiction Adventures
Version 0.357
Role Playing Adventures in Science Fiction
The story so far…
There has been a terrible war that has left the systems in turmoil. There are many dead planets out in the galaxy that no side won as the war itself ruined the planets.
The year is guessed at somewhere around 21,777 give or take 20 years either way. Much of the records of the 10 million inhabitable planets and the 300 billion stars are lost as well as most of past history. The planet Terra is a lost legend from long ago although some of its churches and cultures still do exist in much evolved forms. It was found that humans were all over the galaxy and even in some other galaxies that have been explored. Many of these humans have changed or been modified into very strange sub-races.
There are many sections of the universe that are suited for different styles of play and one can feel free to add another section as much of the STARCLADS universe is unexplored or undocumented due to the great collapse.


This game is first and foremost a Space Opera styled RPG. It also has the features of an economic game with fortunes being made and lost.

UNLIKE many other Sci-Fi RPGs it is very rules light!


At last a free from and very rules lite supers game. You simply write up a super and start playing in minutes. Power and Combat effects are determined by a D20 roll and interpretations of the roll from the perspective of the player and game master. Destiny Points take up the slack of attributes! Teams can be formed! Villains can be defeated! Buildings and city blocks destroyed in the process!


I also have a nearly complete Retroclone of a certain B-MOVIE Late Show RPG.

I also have a PUNKS game set in a fictional corrupt city in the early 1990s. It's loosely based on collected punk rock stories of many of my old friends. Many of the encounters are not politically correct but for some of us it's what we went through in our youth. It was a time when music, hair, girls, drugs, alcohol, and freedom were all important! It's going to be set up where the rules can be used ti tell other tales in the early 90s as well.

My other project is White Trash RPG! A rip-roaring story of what goes on when the coal mines and the plants and factories dies in  the Deep Dark Woods! Small towns located off the beaten path die and the people become tribal. The government came in and bought up much of the land and somewhat cut off the highways by not repairing them.  They started dumping toxic waste and other terrible thingsThe old military base is still got it's lights on. . Some people stayed and they became dangerous to outsiders.  Meth labs, moonsine, and weed farms put food in the mouths of babes. Old feuds still linger and sides and factions were formed.  Worst of all there still are things dark and evil that lurk in the woods. Many people tell of supernatural horrors like the pig man and the wood witch called up from dark times long ago when the dark woods people began to suffer.

In a really really hopeful next week timeline me and my Co-Author of No Hope a terrifying zombie horror RPG will be available for sale! This game is scary because the characters are just normal people! These zombies are the one bite and you're over type. Best of all less than five minutes to create a victim er I mean character.