The Dark and Horrible Night of the Gore Ogres! 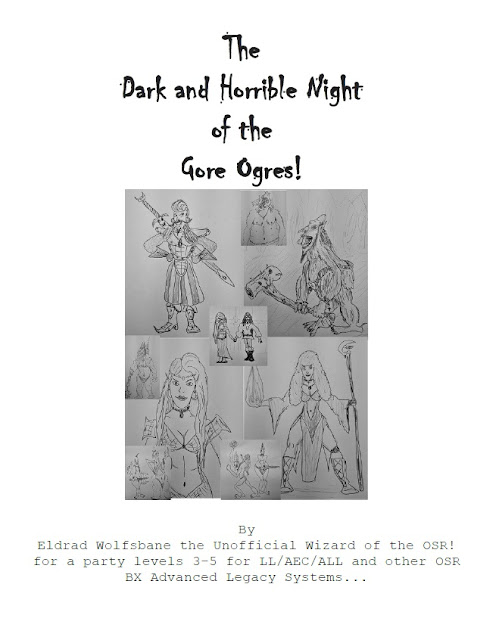 The party is invited to a gathering of friends at a far out ancient woodland manor for a joyous wedding! The most handsome groom's deceased father is a famous Ogre Slayer from back in the day and has the fortune to prove it! The groom was once an adventurer with the party but decided that his family businesses needed attending too after the death of his wealthy and most admired father. The young lord has since met a beautiful half elven maiden and they are to be married and not a more perfect place to be married than in the ancient woodland manor that was once a ruin that was the home of foul, malignant and malicious ogres! Finally a time of relaxation and merriment! No blades, spell, arrows or traps here! Plenty of fair maidens and bachelors running around! Food, drink and music! What could possibly go wrong?

BUT FIRST! WE MUST START WITH A TALE FROM LONG AGO!

A TALE of an Ogre SLAYER!


OGRES!
Foul Fell Fearsome
MALIGNANT
That smell! Rotten! Spoiled Milk, Vomit, Sweat and SHIT!
Giant clubs, hammers axes!
There was tales told of one Ogre that was the worst! 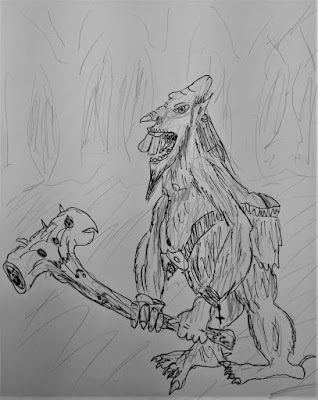 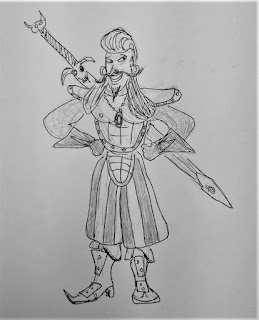 Martino Mondragone the stylish! With his fine clothing and armor! His steel shod boots! Adorned with full of magic jewelry hard fought and taken from dungeons deep! Fine long black as coal hair and excellent mustachio! A manly man! A ladies man and there was no more beautiful young lady of legend than Brigitte Brightview, the lady maiden of Castle Dandelion! 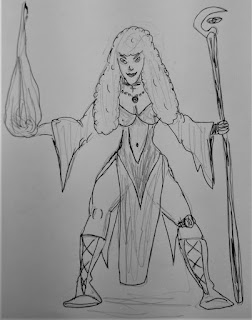 Her eyes of emeralds and golden hair adorned with jewels, her dress woven of the finest silks that flowed over her perfect skin. It is said that angels were heard singing the night of her birth and it were only the manliest of men that could take her as her cleverness and wit had no equal and she was gifted with the sight and easily learns the arcane magics of the ancients with ease!
Such was the meeting of Martino Mondragone and Brigitte Brightview! Twas love at first sight but not after a great romance tale of legend that will be left to another time to tell.
They had many children but their best of their loins was Miguel Mondragone Ogre Slayer's Son! BUT more on him later! 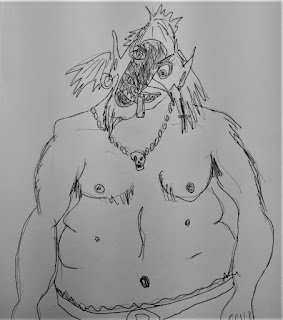 His father slain years ago by Martino Mondragone and he, as a child ogre, had his face STOMPED by Martino Mondragone, leaving a permanent boot print in his already vile and ugly face. Before you judge ol Martino to harshly, you must understand that ogre children are given their victim's children to play with by the adult ogres which always ends in their horrible deaths as they are just as cruel, vile and evil in childhood as they are in adulthood. Martino felt mercy on the gigantic horrible ogre toddler (not realizing that he had just horribly murdered over half of a village's children while the other ogre toddlers took care of the rest) as he cried and begged for his miserable life and let that sick and evil bastard go and now, all these decades later, this Ogre BOOTFACE BOBBY and his party of Ogres are the new plague in this realm! After finding all of the village's children slain, Martino Mondragone felt regret for the rest of his life for such mercy.
It was three years ago his light of his life the Lady Brigitte died in her sleep and a year later Martino Mondragone drank himself to death, leaving his many children his many estates to split. His favorite son Miguel Mondragone got the woodlands manor called Mondragone Manor, the Jewel of Brigitte! A sadness lurks about the place now and the faint sounds of Martino weeping can be heard at times in the dark dusk of the evening...

Miguel Mondragone went adventuring with the party many years ago and showed himself to be a brave and daring and now a second level fighter! A truly trustworthy and stout friend in battle and in life. It was when he met the half elf Sarah the Pure of Golden Hair, now a second level cleric of the most lawfulness and goodness! It didn't hurt that she also possessed a legendary beauty equal to the angel's! The kind of beautiful woman that kings and fools of the ancient ages started wars over! Despite all the other male members of the party trying their best, she only had eyes for Miguel and it was obvious that their adventuring time was over and they were going to be starting a life together. Now any of the other male players with a charisma of 16 or more may have had a few romantic moments with Sarah or it was definitely some sparks there that were put out when Miguel came along. This may be an element of contention for some members of the party and for just good story.
It had just been around a year since you last seen Miguel and Sarah and they have invited you by messenger to his woodland Manor for a wedding (that all of you knew was obviously going to happen) on the last day of the month! It will finally be a time where the party does not have to worry about fell beast, dangerous and insidious traps, and delving in dungeons deep! This wedding is going to be a party of legend!

Each party member describes how they get to the woodland Manor. Just for flavor, here is the description of the surrounding area. Feel free to make that an adventure of the party getting there if you don't want to just start them off at the manor!
There will be a rough map that has one old cobblestone highway, an ancient road that was there from the last age. Reports of trolls in the woods were heard a few months ago but none has been seen since. One can also enter from the old creek by raft as the stream flows right past the place but it's know for it's flagitious giant algae covered freshwater crabs as large as a table and baneful and malignant bog octopuses from the putrid swamp. Those of evil hearts, it is rumored can make deals with these eight legged horrors! Crossing through the dark and haunted Scaredark Woodes will surely get one lost with all the dark things there. Especially the undead that lurk in the ruined barrows and shadows...

Posted by Eldrad Wolfsbane at 1:26 PM