Swords and Wizardry! What a game!

It invokes this primal primitive version of gaming.

That incredible line "Imagine the HELL of of it" is the mantra.

Due to it's lack of rules it frees one to create.

The simple attributes puts the gamer into a different place of just story and not game.

For the game master it blows the lid off of creativity because he can just write it out or make it up as he goes!

Either way is easy!

It spawns in the mind new worlds of fantasy. 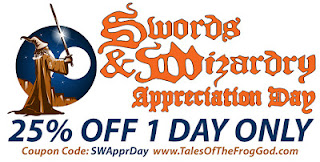 The D20PFSRD store is also running a sale on Swords& Wizardry PDFs. Use the provided link and use coupon code: SWAD252013

These blogs can also be found on the blogroll over at 2000coppers.com
Posted by Eldrad Wolfsbane at 5:57 AM