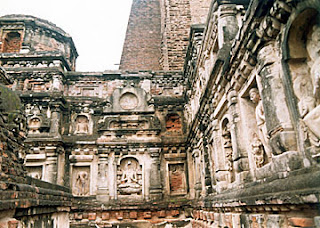 You hear this crap all the time from old and new school gamers. With a defiant sniff...

"Me and my players don't like dungeons. We believe in deep role-playing. Dungeons are so boring. Just going from room to room killing stuff, It's so boring and blah."

Well Then whomever has been running (and writing) your dungeon needs a bit of schooling. If you limit your game to "no dungeons" then you are doing it wrong.

FIRST When creating a dungeon don't just make rooms fill it with monsters and start playing.

All dungeons should have their first purpose before they were dungeons. In my huge megadungeon "The Black Stairs" it was originally an underground colony from some unknown time.

An underground city populated by humans long ago then something terrible happened! It seems they all just disappeared or left in a great hurry.

Nature should also play a role in a dungeon. In the black Stairs water has worked it's way in many places. There are two waterfalls that now pour through huge holes that go deep into the dungeon never filling it up. In some cases if one drops down can access the dungeon from multiple ways other than the front door.

There are also chimneys that are pouring out smoke from unknown depths as well as tracks and trails showing that this dungeon is a living place.

Dungeons should also have factions and some some way of trade and commerce though some are connected to the mythic underworld and have no rhyme or reason to them.

If a dungeon is large enough then there should also be various interested parties other than the PCs. In my Labyrinth Lord version there is a huge group of NPCs that belong to the local adventurer's guild who have staked "official" claim to the dungeon. A large party of over 12 NPCs. Always increase NPCs if the players were foolish enough to go back to town and brag on their adventures and show off all the treasure they found.

In the Pathfinder version I did not have time to make them (Cause the system is a clunky mess of too many rules) so they are just found dead.

You should use various descriptions to portray a sense of ancientness and oldness. The players should be able to feel the textures and smell the smells of the place.

Also make odd traps and tricks that strike the fear of death into the players.

Add elements of video games such as doors that can ONLY be unlocked by certain magical keys.

Have various NPCs from civilization give the players quest to find certain objects within the dungeon.

Let many treasures not all be gold jewels and gems. Sometimes and ancient set of books, tapestries, furniture, clothing, wine, or whatever can be the most valuable treasure.

Many intelligent monsters will be ready for the next visit of the adventurers with ambush and traps.

Maybe even a less intelligent pet is corralled for the PCs to encounter...

Posted by Eldrad Wolfsbane at 4:51 AM