So what are some of the features of different Old School Games and their clones that you dislike and why?

DO you have a house rule  against the disliked feature?

How many of you use a miss-mash of many rulebooks and systems?

What is your final system or lack thereof like?

What is an RPG game breaker that you cannot tolerate?

It is in a very rough draft form.

For example here is a character made in less than 5 minutes.

I roll for Might, Moves, Mind, and Manipulation 1d6+3 each.

I kinda like this guy. He is faily average in the physical and mental but he is quite a manipulator.

Maybe I could make him some sort of entertainer?

Entertainment – You are a star of stage and screen. You are some sort of
entertainer. You have a fancy wardrobe and live a life of luxury. Most
Entertainers are owned by their Corporate agent and are on a life provided
by the corporation. You don’t pilot or drive as the Corporation provides all
this for you. You only stay in fancy hotels and apartments provided by the
Corporation.
Starting Equipment: Many Sets of Fine Clothing, and 5000 credits

Nah maybe a diplomat or blind face of a local planetary government?

Bureaucrats – Bureaucrats are the living red tape or lubricant of any
government system. They can be very helpful if motivated. Most are
untrained in any sort of combat.
Starting Equipment: Suit, Hover Car, Comlink, and 1000 credits.

Hell money is power and the Corporations have it all! New nobility of the Sectors!

Corporate – Corporatist are the movers and shakers of the universe. They
are the managers and supervision of the corporation s that employ everyone.
They don’t tell people how to do their jobs they tell people to do their job.
Fine suits and high living is the way of the Corporate. Corporations in
STARCLADS are ruthless cutthroat operations that act as governments unto
themselves. Most starting Corporatist have no combat skill but they gain
some throughout the years.
Starting Equipment: Fine Suit, Luxury Hover Car, Comlink, Translator,
Laser Pistol and 5000 credits.


So I make him a corporate. Cool. I could have just made something sles up and went with it. Me and the GM could have picked out the appropriate equipment and just got started playing.
Posted by Eldrad Wolfsbane at 6:06 PM 1 comment:

Back to the Dungeon RPG Update

Well I am currently cleaning up the documents and trying to clarify and fix grammatical errors as a natural progression of Game Development.

Been working on clarifying the spells, reformatting the document in a larger sized font, and making it Zine styled.  Basically far easier to read.

Did another play test with my daughters, wife and friend (who was against the project but seemed amused after playing).

It is truly Easy to Run and Easy to Play. Still lots of tiny problems and details that need to be fixed.

I will take his suggestion into consideration about simplified encumbrance as it never bothered me and I always kept track of it but for some it is a bother.

1 point of Strength equal one stone of weight. The average person can carry 10 stones. Less than a Stone does not count most of the time.

I am also going to simplify the experience points down to a far simpler system taken from a PF game I was playing in that someone took from a post posted on a TL forum.

I may have a list of backgrounds that have no mechanical addition to the rules save the DC of an action set by the Game Master.

Old friends have showed back up and want to game and want to play something simpler.  Come to find out the 3.5 game was fun back a few years ago, but there were too many rules for them. I gave them copies of BttDRPG to take home.

I would love a Minister of Magic to  come along and split my Wizards into schools and my Sorcerers into Bloodlines, and Clerics into Specif Mythos, and Domains.

What other "sacred cows" am I going to cut out or change.

Really there are so many grammar and format Nazis out there when I clearly stated that this document was a rough draft. Geeze let me know about the content, not that I repeated a word or my spellcheckkker screwed up unless you are volunteering to be an editor for the game.

It's called a rough draft for a reason. The document was thrown together in an effort to just finish the damn thing.

A culmination of some of my class, race, level, fantasy RPG experiences of 32 years of how I want a game to be played, ran, and flow.

EXCLUSIVE: This ought to reverberate through the geek realm. Warner Bros has acquired rights to make a movie based on Dungeons & Dragons, the perennially popular role-playing game fantasy game. The studio is actually quite far along in the development of the project, as it will use a script by Wrath Of The Titans and Red Riding Hood scribe and Frank Darabont protege David Leslie Johnson.

That script, Chainmail, was acquired last year as a free-standing project, based on an obscure game that was also hatched by D&D designer Gary Gygax before he and Dave Arneson launched D&D. It is being retro-fitted to fit the much bigger game creation. The film will be produced by The Lego Movie producer Roy Lee and Courtney Solomon. The latter actually directed a 2000 Dungeons & Dragons feature, a film that starred Jeremy Irons and did not do well.
Given the heightened interest in sword, sorcery, chivalry and cool creatures within Warner Bros with the HBO series Game Of Thrones and the ongoing Peter Jackson-directed adaptation of JRR Tolkien’s The Hobbit, it is expected that the studio will expend the necessary resources to create a world around a well-established brand which has generated north of $1 billion in books and merchandise since it was launched in 1974. The studio is going out to filmmakers and I’m told they are treating it as a big priority. Alan Zeman is exec producing. I’ve never played the game, but it is a fantasy universe on the order of The Lord Of The Rings, which was most popular back when players had to use their collective imaginations — before video games became so visually sophisticated that it eliminated the need to do much more than sit back and blast away. The studio’s intention is to reboot the franchise for a new generation

So what if there was a Supers setting where the hero groups aged like we do? A gritty setting based on most major comic lines as in a love letter to them and political commentary on our world today? The aged heroes are very nepotistic about letting new talent come in!

What if in 911 there was a third plane and it killed The Protectors in The New York Megaopolis, one of the major three supers group out via a Negaton Bomb.


There were only 3 major super teams left with a few heroes working independently here and there. Most of the Supers were getting old but held their positions long after they should have retired.

The 911 incident wiped out the New York team and the hearts and minds of the American people via a Negaton Bomb leaving only the Los Angeles and Houston based teams.

They had the same problem as well. An established system of old heroes in power controlling what goes on. They all are in great peril as they are facing greater super criminal challenges and greater criminal organizations. The New York Megalopolis has been left a haven for super criminals and crime syndicates.


West Coast, Los Angeles: The Guardians Trouble from all sides! Internal struggle is the worst problem these guys are having. Most of them are getting old and they don't want competition. People are beginning to turn against the heroes and the heroes just don't really care.

South Coast, Houston: Knights (Attacked by Cartel) The Houston based heroes of the South. The Cartel has been on a major onslaught and it is WAR. Many super mercs are on call and it's 5 million a head bounty on the Knights. Worst of all Cartel controlled media is having a feeding frenzy against the Knights.

Is there going to be a newly formed New England team to take back The New York Megalopolis?

Will the negative feeling towards supers by the majority turn into something far worse such as a holocaust? Already some heroes have been lynched!

Some say the government is getting ready for an onslaught against super powered beings.

Posted by Eldrad Wolfsbane at 8:16 PM No comments:

Back to the Dungeon Zine V1 Issue 3 is OUT!

BACK to the Dungeon ZINE 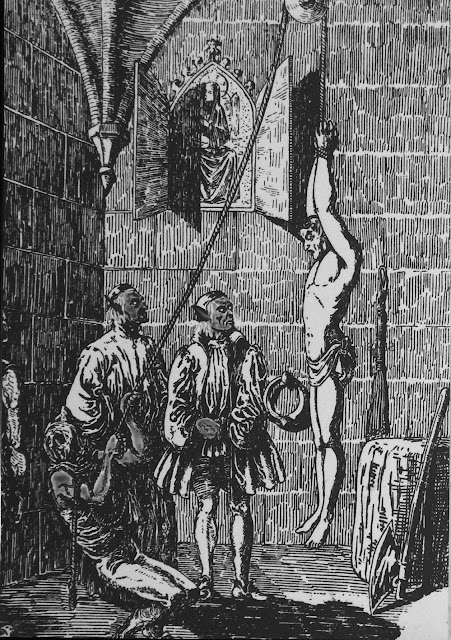 Oh my gods! There are Drow down there! Lot's of them! Hide! Do you know what they do to prisoners? 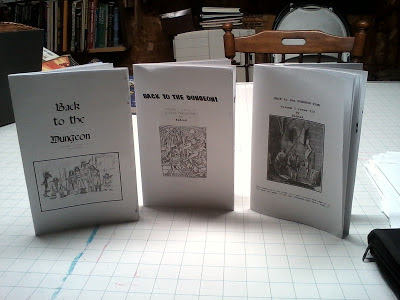 May Monsters: The GIST

A Gist is the result of an evil god breeding with a human or demi-human. Gist come in various forms, some will appear as little girls with large horrible black eyes and huge misshapen teeth or as small deformed boys with twisted shriveled bodies, fearsome clawed hands, huge black eyes, and over-sized misshapen heads. From their stomachs they have four tentacles that have a range of 50 ft that drain the living optionally they can attach to a victim and slowly drain hit points that heal the Gist while keeping that victim a prisoner, the females have a biting attack and the males have a claw attack that paralyses. Any within sight must save or run away in fear that is below 8th level. They are immune to all non magical weapons, cast spells as a 6th level magic user, and have 40% magic resistance to any spells. Many gist will have various evil minions working for them. They love to take over small out of the way settlements and slowly kill all the inhabitants.

Posted by Eldrad Wolfsbane at 10:04 PM No comments: