The Little Barony far far into the Western Frontier 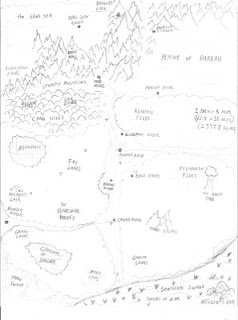 Here it is my sandbox map that has been going around in my head for the last few years. Ever since I went to make a really detailed setting for 3rd edition and found it near impossible due to the length of time it took to create I began looking at the older more simpler versions of the system.

I created the Odd Earth concept with the original Odd Guild group on a few postings. Later on with the new Odd Guild members came out with a setting called Odd Earth but I assume forgot to give me credit for the name and initial concept. Their concept of it a dream world of the know world has failed and as it was I that came up with it originally I will now use it in the background for my game world's name.

Being that I am unemployed I will most not likely be able to go to Babelcon. I was so hoping to play S&W with the Red Priest I do have one redeeming possibility, with half the gaming group being away at the con I will have the rest play my S&W setting. There has been game CLUNK with the hours long combat in 4th edition. People have began to notice that battles are long and get boring no matter how good the DM is AND we have fantastic DMs. S&W will show these gamers a new way (OR their munchkinisims will come through) that simple can and does work.
Posted by Eldrad Wolfsbane at 10:38 AM