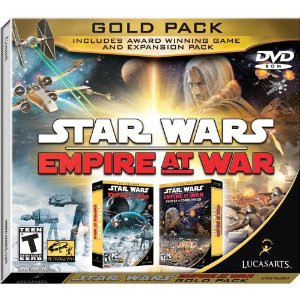 If you are one of the very few who has the computer that this game is compatible with then you are lucky. If you have the older versions then don't respond because you don't have the problem. All I get is the Lucasarts Intro Sound and a white box. Cosmi was nice enough to send me a replacement but it does not work either. I have two copies of crap.

Don't buy Star Wars Empire at War Gold Pack. I hope I can get my money back from Wal Mart.

Their release of SW Battlefield II was also a glich filled stinker which was never patched either.

Lucasarts as usual are ignoring their customers. How can Lucasarts keep releasing glich filled crap? Do us a favor Lucasarts. Get out of the video game business if you don't give a damn about your customers.

What happened to the excellent titles like Jedi Knights and X-Wing and Rebel Assault?
Posted by Eldrad Wolfsbane at 8:38 PM